Sautéing, stir-frying, searing, and pan frying fish are all variations of the methods used for cooking fish and other foods in a shallow pan. The fish is usually cooked with a small amount of fat at a high smoking point until it is golden brown. It's a quick method and adds good delicious flavor.

The fat is usually oil or unsalted butter, or a combination of both. What kind of oil should you use? That depends on you and sometimes the fish dish. The most commonly oils used is olive oil, vegetable, peanut, canola, corn, sunflower, and safflower oil.

Sometimes no oils are used when using a nonstick skillet. That's a personal choice of the cook or the person eating it. The fish is cooked mainly from the surface heat of the pan instead of submerged in the hot oil, unlike the way true deep-frying fish is. 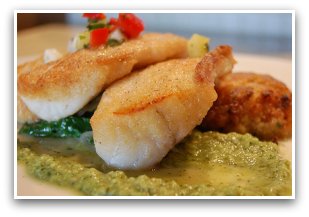 5 Techniques For Cooking Fish In A Pan

When sautéing fish, a thin layer of oil is added to a pan over high to medium-high heat. A thin fish fillet can be seasoned or/and lightly dusted with flour, whichever you prefer.

The fish is added to the pan and cooked to a nice golden brown on each side, turning only once. There is no need to mess with the fish much while it is cooking, only to give it a quick check for doneness.

The drippings left in the pan can then be used into a deglazing sauce. Remove the fish and drain the fat from the pan. Scrape the bottom of the pan, as the scrapings enhances the flavor of the sauce. Then add your stock, wine, or cream, and cook over high heat just until it simmers to a boil or when it's done.

Pan frying has the same concept as sautéing, except that larger pieces of fish are usually used with more oil, enough oil to come up around the sides of the fish. Thick cut fillets and steaks work well for types of fish used with pan frying. 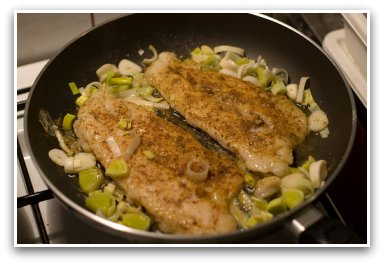 Stir-frying fish is relatively the same. However, the fish is cut into rather smaller uniformed pieces and are tossed or stirred around until they are cooked brown on all sides. Traditionally, it's cooked over medium-high to high heat in a wok or deep frying pan, with corn oil or peanut oil.

You can also sauté and roast, also known as skillet-roasting or sear-baking. Using an oven proof pan over medium-high heat, sear the fish on one side, with the skin side up, if you are leaving the skin on. Turn the fish over and immediately place it into the oven at 450° until it's done.

Blackening is done by dredging fish fillets in cajun spices and cooking the fish in a very hot cast iron skillet. The fish should be done when it has turned crispy and black. The seasonings are what cooks black, not the fish. This creates an extra crispy crust. Bronzing is done the same way, except using lower heat. Be sure to open up some windows when doing this because it creates a lot of smoke.

Other Fish Cooking Techniques Other Than Pan Frying: