Dwayne "The Rock" Johnson loves fishing so much that he had a lake built on his personal family farm land.

The Rock's fishing pond contains largemouth bass, sunfish (bluegill), bullhead catfish, and carp. He had his fish planted in there as little juvenile baby fish, and is raising them to be big healthy hogs.

Live bait is delivered by a fish truck for the fish to forage on, and so they can get nice and fat, healthy, and raised to be aggressive. To help ensure that his fish thrive to the fullest, he has specialists come to inspect the water, vegetation and ecosystem.

Ready to check him out in action? Know your roll and shut your mouth, jabroni. If ya smell what The Rock is cooking! Because he is layin' the smack down on these roody-poo candy ass fish!...

Fishing Pictures Of "The Rock"

The largemouth bass was posted on July 6, 2012. The other of himself on the airplane with his fishing pole and cooler was added on November 1, 2014. 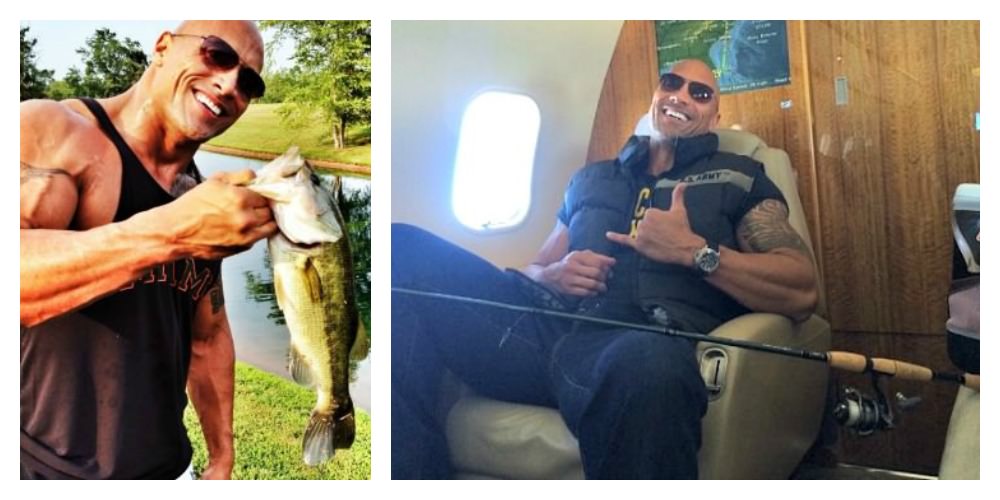 The Rock with one of his largemouth bass. And on an airplane with his fishing pole.

These Instagram posts are live posts. So, you can interact normally by following him, "liking" them, and commenting.

As you can see in the following Instagram post, The Rock is fishing from the bank with a top water plug. He states that he's been at it for about an hour, but not even one of his ungrateful fat hogs has hit his lure.

Regardless, I think that we all can appreciate that awesome view of his man-made freshwater fishing lake.

As an animal lover - both land and water - I've been raising my bass for years now on our farm. I feed them like kings with live bait and train them to be extra aggressive killers. I have specialists come in to inspect the water, vegetation and ecosystem to make sure they're living like the top of the food chain predators they are. Big daddy comes home to recharge his batteries & spend time with them and not even one of these ungrateful fat hogs will strike my top water plug I've been working for an hour now. Cool.. just remember who's in charge of the fish food truck you sum bitches. #ResetAndRecharge #JohnsonFarm #WhereEvenTheBassHaveAttitude

Out in Miami, Florida, The Rock is drinking Coronas and fishing for shark while on set filming an episode for his HBO television show Ballers...


In this video here he is showing off one of his largemouth bass he caught with a double willow blade spinner bait.

Raisin' my fresh water hogs for years to be aggressive, but I could do without the name callin'...#INeedMoreBaitFish #WhereTheHellsTheFishTruck #FamilyFarm #CountryBoysCanSurvive

My lil' beast here attacks a double bladed spinner that's damn near bigger than he is. Been raising my bass, sunfish, carp and catfish on our farm since they were babies...#RaiseEmAggressive #ProudPapa


This 200 pound tarpon took him an hour of fighting to finally be able to haul it on board the boat.

#FBF #FishWhisperer On very light tackle it took me an hour to bring this 200lb beauty in. Took me another 15 minutes to gently revive him in the water before me and my bud Captain Brian Sanders released him. #UsFloridaCountryBoys #GettinItDone #AllDay #EveryDay #TarponToldMeToKissHisAssAsHeSwamAway


Another largemouth bass. I assume that he also used a soft plastic lure rigged up weedless Texas rig, just as he notes in his Instagram post two days prior just under this one.

Bass, carp, bullheads and sunnies.. I raise em fat on the farm. #ColdWeatherTime #MakinMyBabiesSluggish #NoMoreSpinnerbaits #HadToSwitchToSoftPlastics #TexasRigStyle Many of you are saying what the f*ck do these hashtags even mean...;) #BassMasterTalk

More Information About The Rock

Most followers know The Rock as a former WWE (World Wrestling Entertainment) superstar/megastar champion. Also known as "The People's Champ". Signature moves included the Rock Bottom, which usually ended with the People's Elbow for his finishing move. During his hilarious skits of trash talking other wrestling entertainers, or arousing the ladies, The Rock would amuse the audience with the People's Eyebrow.

Now days, Dwayne Johnson can be found on the big screen making one entertaining blockbuster hit movie after another, as well as a series of television shows, amongst a plethora of other great things.

And to get away from the rigorous daily grind, he enjoys to unwind during his downtime on his family farm with his horses and fishing his freshwater lake.

Leave a comment, question or tip in the box below.