Bait caster reels are also known as a baitcaster, baitcasting reel, and casting reels. They are referred to as "conventional reels" in the Unites States, and as "multiplier reels" in Europe.

The conventional reel, though nearly identical to the baitcaster, is designed for trolling and vertical fishing. They are better noted for big game fishing and salt water tactics.

The bait caster has a smaller profile and is designed for numerous casts throughout the day. They are better noted for freshwater fishing, but are also widely used in saltwater. They can also be categorized as low-profile and round reels. 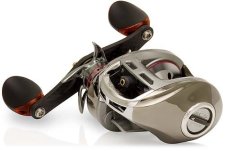 Whichever style it is, these reels sit on top of a casting rod.

Skip down to shop for baitcasting reels now.

Or continue reading to educate yourself more about the pros and cons, how they're made, what makes them tick, general maintenance, and some helpful tips.

The Many Advantages Of Baitcaster Reels

These reels are capable of long casting distances, but are better suited for accuracy. The revolving spool allows the angler to fine tune their casts. By thumbing the spool as the line is coming off enables the angler to place the lure exactly where they want it, which is also great for sight casting.

Baitcasting equipment is best with larger lures as it requires the weight of the lure to help provide the momentum to pull line from the spool. A lure heavier than 1/4 of an ounce is best suited. These reels are ideal for crankin', pitchin', flippin', finesse fishing, and many other styles of fishing.

Stiffer fishing rods are best matched with a bait caster reel when the situation calls for the heavier lures and lines. And it's better to use lightweight rods when finesse fishing.

They are able to handle a wide range of fishing lines, such as braided, fluorocarbon, and monofilament, which also includes light to heavy lines. During a cast, the line flows smoothly through the rod guides which improves the casting distance. And line pulls freely from the spool when fish takes drag, creating minimal friction.

These days, bait caster reels are made out of aluminum, stainless steel, and/or synthetic composite materials. And they have a small revolving spool.

Most of these reels are equipped with level-wind mechanisms. They have a push button or thumb bar that frees the spool so that you can cast freely without having to deal with the handle, or even a wire bail system like spinning reels have.

However, bait casting reels are prone to backlash. Why? Well, this is because of the rotating spools, and the inexperience of the user.

The braking system can be adjusted to suit the weight of the bait...

The spool tension knob is the main system to adjust to help fight against backlash. The best way to adjust it? Holding your rod out in front of you, with the spool disengaged, allow the lure to fall slowly to the ground. After it lands, the spool should not rotate more than once. Then adjust as needed.

Re-adjust every time that you change lures, and as conditions present themselves, such as wind factors, after breaking off from a hang up, and as your line changes as it gets wet.

There are two common types of braking systems for bait caster reels:

The drags often need to be adjusted according to the weight of your bait, conditions throughout the day, and sometimes while fighting fish.

The gear ratio is the speed of line retrieval around the spool as the handle is cranked. The standard would be about 5:1:1. Naturally, the higher the ratio is, the faster the retrieval rate would be. It would generally depend on the style of fishing you will be doing.

If you are going to be burning bait through the water, you would want a higher gear ratio of maybe 7:1:1. 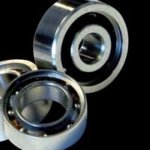 Many people believe that the more ball bearings, the better. That's not always true. It's the quality of the bearings that count. Some bait cast reels may contain a lot of bearings, but they may just be a bunch of small and cheap bearings.

The biggest difference between bearings are the seals. They are either encased with a plastic seal, pressed in with a metal shield, have a retaining ring in a metal shield, or are open. Shimano is the first to develop the open bearings. They have more chromium for greater corrosion resistance and are packed with grease. Bottom line, look for anti-corrosion bearings.

Bait cast reels can be difficult to master and requires quite a bit of practice to become efficient with them. You definitely would want to practice at home first to get the hang of it.

Even the best in the business encounter backlashes, so don't feel deeply discouraged when it happens. Backlash occurs more often when casting into the wind. Cast with the wind whenever possible to help minimize the nasty backlash with your baitcaster.

Good fishing reels should last a lifetime with proper care and maintenance. Keep your bait caster reel free from sand and dirt. Store in a dust free environment or/and use a protective reel cover for your equipment.

Lubricate your reel and its parts as needed, but sparingly. Only use recommended reel lubricants, rather than WD-40. Why not WD-40? It's a fact that it clunks up over time which ruins your equipment and does not allow for smooth casts and retrieves.

Real Magic and the Ardent Reel Kleen Cleaning Kit are a couple very good top recommended brands that I personally like to use.

The bait casting reel dates from at least the mid-1600s, but came into wide use by amateur anglers during the 1870s. These early day reels were often constructed with brass or iron gears, with casings and spools made of brass, German silver, hard rubber, or even wood. They also were often operated by inverting the reel and using back winding to retrieve line.

Some good modern day manufactures include Abu Garcia, Quantum, and Shimano, just to mention a few.

Shop For A New Or Used Baitcasting Reel