Obtaining a world record crappie is a feat measured all in it's own class.

The feeling of a big fish slamming your crappie bait at the end of your line may have anybody thinking during the initial moments of the fight that the huge pole bending crappie could just be another species of fish.

Crappie anglers can often find themselves hooking into other species like bluegills, largemouth bass or even smallmouth bass...

So, it's not uncommon to think that a big crappie fighting on the end of our line might be a bass instead. And it's always a pleasant surprise to see that it's actually a big fat crappie trying to shake the hook.

The all-tackle world record holder for crappie is a white crappie that weighed in at an astonishing 5 pounds, 3 ounces (2.35 kg). On July 31, 1957 a fellow by the name of Fred Bright hooked into and landed this monster panfish at the Enid Dam of the Yocona River in Mississippi, USA. 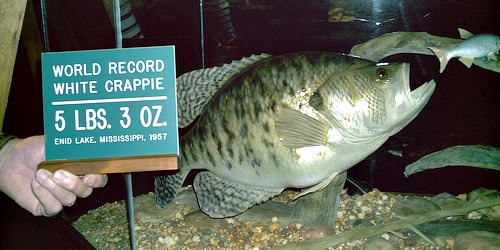 Here are a couple of old and quite rare photographs of Fred Bright with the infamous trophy fish.

Here's another picture of the record fish. It's a mount done by Wildlife Creations Taxidermy. 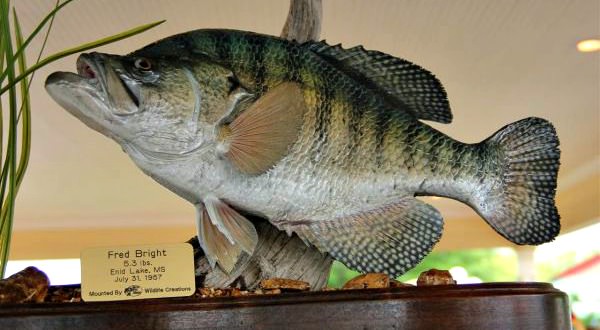 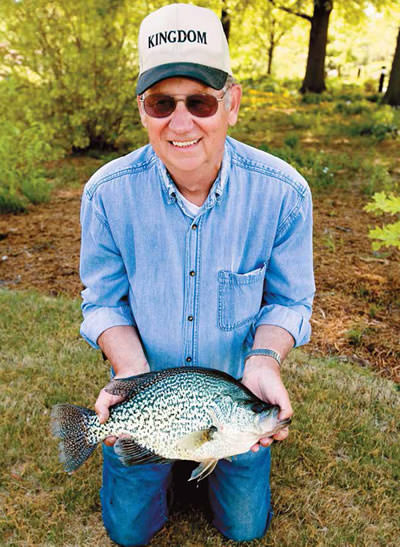 The all-tackle world record holder for black crappie weighs in at an impressive 5 pounds even (2.26 kg). On April 21, 2006 an avid fisherman known as John R. Hortsman was fishing at a privately owned lake in Missouri when he hauled in this big black beauty.

John and his son had been fishing at a lake that they had never been to prior. After a couple of hours grinding it out, John landed the fish of his life.

The fish was named Pat. It was donated to the Bass Pro Shops store located in Columbia, Missouri and placed inside their huge aquarium on full display for all visitors to gander at in amazement.

Unfortunately, the fish has since passed away. But there is now a plaque in recognition of Pat attached to the tank.

To see pictures of the 11,000 gallon aquarium and the plaque at the BPS Columbia, Missouri store, you can check out the short article written by BPS commemorating Pat (our apologies, but the article has been removed from their website).

On November 28, 1969 Lettie Robertson caught an absolute giant 6 pound crappie out of the Westwego Canal in Louisiana.

Because the fish wasn't identifiable as either a black or a white crappie in her picture, and the fish wasn't officially certified by anybody, the International Game Fish Association does not recognize Lettie's fish as a record.

However, The Freshwater Fishing Hall Of Fame & Museum seems to be a little bit more lenient and noteworthily cites her monster crappie as the world record sac-a-lait.

Do you want to know how to catch huge world class crappie, possibly even the next world record crappie? Or even a state record?...