Technology is improving on these lightweight reels, and they are fun to use. Many people associate them as little kiddie tackle. Sure, they're great for small children and beginner fishermen, as they are virtually hassle free. However, they can also provide a nice challenge for the experienced angler as well.

An underspin reel is also known as a triggerspin reel. They are very similar to spincast fishing reels and spinning reels. They have a closed face, like a spincast reel has. And they hang on the under side of a standard spinning rod, as such spinning reels would. A neat feature that they have is a trigger, which is used for casting. 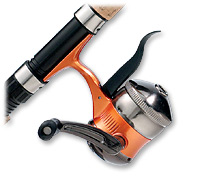 The closed face is usually a rounded hood with a hole that allows the fishing line to pass through.

The enclosure can be made from hard plastic materials, or rigid metals like aluminum alloy. The enclosure houses the spool system and other components, and prevents the line from backlash.

Newer models have increased the hole size for much smoother and longer casts.

Advantages Of An Underspin Reel

The nice thing about these reels is that they come pre-spooled with fishing line. They usually have light line of 6 or 8 pound tests. However, they can also be found with heavier pound test lines of around 15 to 20. Monofilament line matches up best with these because it provides smoother casts, with less resistance than braided line would.

Underspin reels are suitable for most types of freshwater fishing. They are great for catching small panfish. Or can also offer a nice challenge for playing out larger game fish.

More recent and more sophisticated models and their manufacturers are upgrading gear retrievals, drag systems, and handles, making it that much more durable, fun and exciting for everybody to use.

They are best suited for light tackle, however, higher gear ratios of 4:1 are just as common, allowing it easier to fish a much wider variety of lures properly.

All of these have external adjustable drag systems and many are very good, but probably not as good as open-faced tackle will have.

Like many other types of reels, these come in left and right handle retrieves. Different styles include soft touch, single grip, and double grip, just to name a few.

Though these reels have a closed face and are generally inexpensive, proper care and maintenance should still be taken to ensure that they last for a long time to come. Due to the closed face, it can seem difficult to periodically maintain because of the extra measures to go through. However, you still should keep it free from sand and dirt. And store them in a dust free environment and/or use a protective cover for your equipment.

Lubricate your reel and its parts as needed, but sparingly. Use only recommended reel lubricants rather than WD-40. WD-40 clunks up over time which ruins your equipment and does not allow for smooth casts and retrieves. Real Magic is a very good recommended brand that is versatile for many other uses. Purchase Real Magic here.

Some of the better manufacture companies that produce underspin reels include Daiwa, Shakespeare, and Zebco, just to name a few.