Catching bluegill is the easy part. Banging out some trophy sized bulls in the process is the best challenge.

Landing big giant monster slabs of panfish to mount on your bragging wall can be much more rewarding than just filling up your ice chest with a whole mess of small sunfish.

Small bluegills are everywhere. And those are too often simple to catch, right?

But what about the large bull bluegill? That is what can be a bit more worth while to showcase. A few pictures and a trip to the taxidermist.

That's what catching bluegill is all about, other than the obvious reasons of having a blast out on the water, which ultimately go hand in hand. 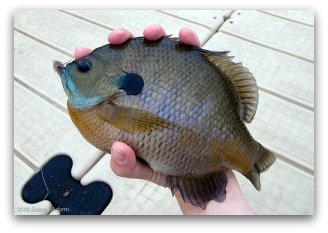 And, of course you still might want to have a fish fry cookout for the evening by using all of those average size panfish that you were able to land. Everybody has to eat, right? Unless you religiously practice catch and release only, which is absolutely fine.

Either way, though, it has been scientifically studied that the much larger size bluegills should be released safely back into the water as well. The reason is for reproduction purposes, as the bigger panfish are said to breed larger sized healthy offspring.

Bluegill feed mainly by sight and are most active during early mornings and late evenings. They will be in shady areas throughout the warmer parts of the day when it's hot as the sun is up. You can try jigging or drag your presentations near the bottom very slowly. Drift and make a few passes if necessary to get the big bites, especially if you know that they're there.

The best times for catching bluegill can be in the spring and early summer. During the spawning seasons they will be the most aggressive.

They will be up in shallow waters nesting, most often on sandy and gravel bottoms. The males will guard the nest and the females will move out deeper once she deposits her eggs at numerous nesting beds.

This is a good time for some sight fishing as you can try to pick off the big ones that you want from their nests.

During other times, big bluegills can be searched for out in deeper open water. Bluegills that are out deeper tend to be larger on the average. They will be scattered about while they still relate to key types of structure.

But, circumstances dealing with their feeling of safety from predatory species of fish like bass, pike and musky, and adequate food resources, and a proficient amount of oxygen, will play a role to enable them to be at ease to congregate in deeper depths of the water column.

So, what can be as exciting as brawling it out with a huge bluegill on ultra light tackle? These highly respected fighters hit hard for their size and offer the similar sweet challenge on light tackle as a bigger game fish would on heavier tackle. 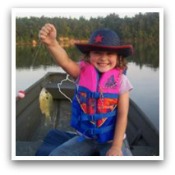